What Americans Ate for Breakfast & Dinner 200 Years Ago: Watch Re-Creations of Original Recipes 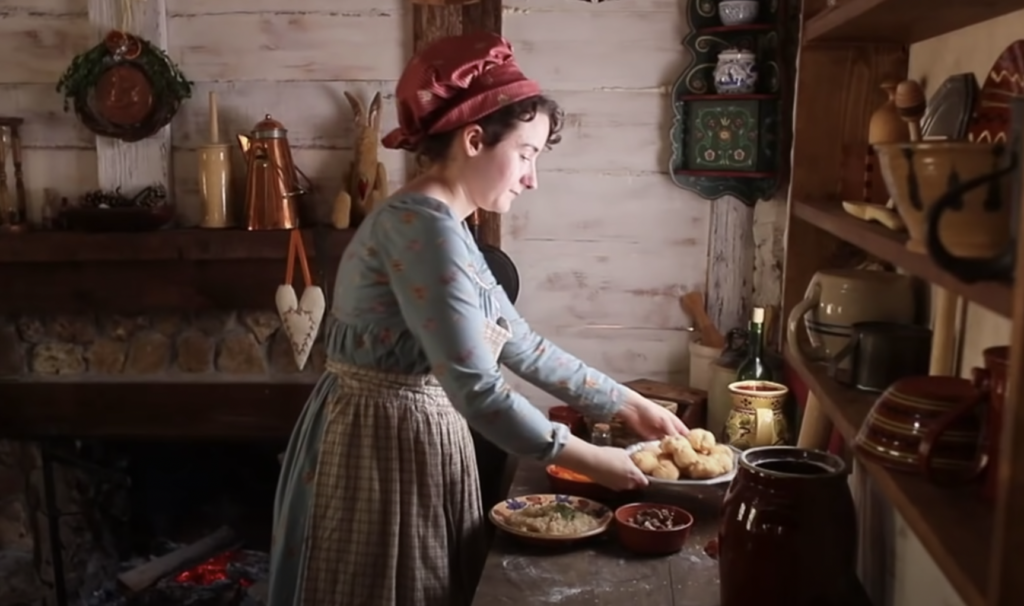 For all the other faults of the 2020s, most of humanity now enjoys culinary variety the likes of which it has never before known. Two centuries ago, the selection was considerably narrower. Back then the United States of America, yet to become the highly developed leader of “the free world,” remained for the most part a fairly hardscrabble land. This comes through in a book like Democracy in America, which Alexis de Tocqueville wrote after traveling across the county in the 1830s — or on a Youtube channel like Early American, which re-creates life as lived by Americans of decades before then.

Not long ago, Early American’s viewership exploded. This seems to have owed to cooking videos like the one at the top of the post, “A Regular Folks’ Supper 200 Years Ago.” The menu, on this imagined March day in 1820 Missouri, includes beef, mashed turnips, carrots, rolls, and boiled eggs: not a bad-looking spread, as it turns out, though its flavors may leave something to be desired for the twenty-first-century palate.

Many of Early American’s new commenters, writes channel co-creator Justine Dorn, are telling her “to add this seasoning and this and that,” but “then it would no longer be loyal to the actual original recipe, which is why you all are here to begin with.”

In the case of the regular folks’ supper, its recipes come straight from an 1803 volume called The Frugal Housewife. As for the johnnycakes featured in “Making a Working Class Breakfast in 1820,” you’ll find their recipe in Amelia Simmons’ American Cookery from 1796, the first known cookbook written by an American. The meal also includes a yeastless bread for which no proper recipe exists. However, Dorn writes, “there are several mentions of working class people who baked bread without yeast in the autobiographies of travelers in the eighteenth and early nineteenth centuries. Because of this we know that it was a common practice.”

Made from a modified family recipe passed down since the 1750s, this yeastless bread looks appealing enough, especially toasted over the fire and served with apple butter. But we must acknowledge that tastes have changed over the centuries. “I am not claiming that this food is good,” Dorn writes. “Sometimes it isn’t. A lot of the foods and seasonings that we take for granted today were very hard to get back then or were only seasonally available.” But with seasonal, “locally sourced” ingredients in vogue these days, it’s worth examining what, 200 years ago, really went into a simple Indian meal pudding or an early macaroni and cheese — albeit one prepared, in true 2020s fashion, ASMR-style.

Tasting History: A Hit YouTube Series Shows How to Cook the Foods of Ancient Greece & Rome, Medieval Europe, and Other Places & Periods

An Archive of 3,000 Vintage Cookbooks Lets You Travel Back Through Culinary Time

Real Interviews with People Who Lived in the 1800s

Based in Seoul, Colin Marshall writes and broadcasts on cities, language, and culture. His projects include the Substack newsletter Books on Cities, the book The Stateless City: a Walk through 21st-Century Los Angeles and the video series The City in Cinema. Follow him on Twitter at @colinmarshall, on Facebook, or on Instagram.