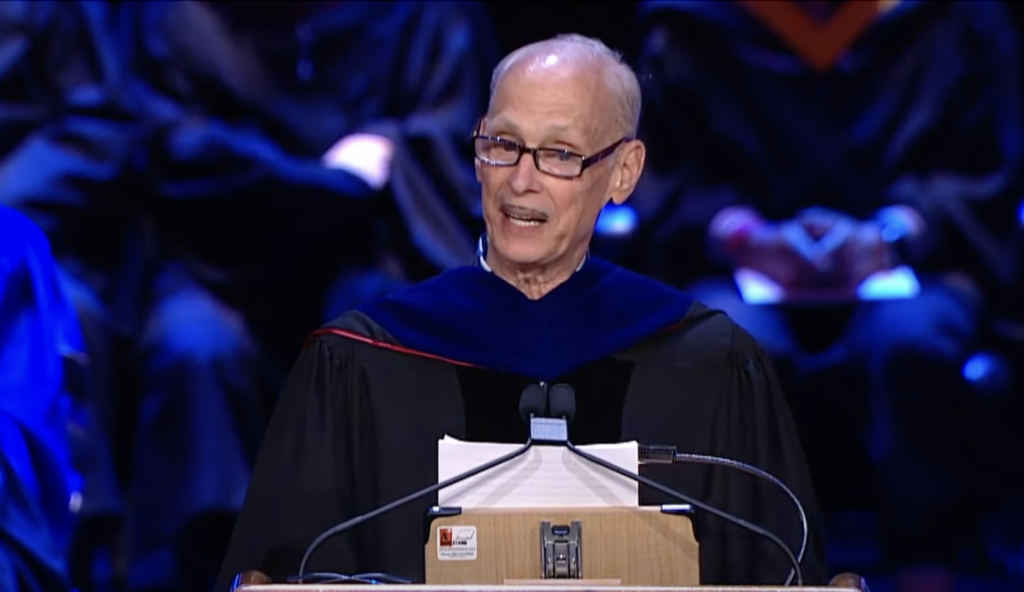 John Waters hasn’t made a movie in quite some time, but that doesn’t mean he’s gone quiet. In fact he’s remained as visible a cultural figure as ever by working in other forms: writing a new novel, acting on television, delivering commencement addresses. His dedication to that last pursuit is such that he even kept it up in 2020, at the height of the COVID-19 pandemic. That year he delivered his commencement speech for New York’s School of Visual Arts not at Radio City Music Hall, as scheduled, but in front of a green screen in Baltimore — which, of course, only enriched the Watersesque sensibility of the proceedings.

Having been forced into the role of “virtual keynote speaker,” Waters made up for it this year by delivering, in person, a make-up commencement address for the SVA classes of both 2020 and 2021. And he did it onstage at Radio City, a venue “known for family movies and the Rockettes. What the hell am I doing here?” As usual in this phase of his career, Waters expresses surprise to find himself in the role of elder statesman.

“In 2020, the School of Visual Arts gave me an honorary degree for, I guess, causing trouble,” he says. “This year, the National Film Registry — yes, that’s part of the Library of Congress, the U.S. Government, for god’s sake — selected my film Pink Flamingos, which New York magazine once called ‘beyond pornography,’ to its annual list of 25 culturally historic films.”

Safe to say that, half a century after its release, Waters’ most notorious motion picture doesn’t repel the establishment as it once did. And indeed, here in the 2020s, how can an artist get transgressive at all? Waters has much encouragement and advice for young people in search of new boundaries to violate. “Outsider old master paintings, narrative abstract expressionism, impenetrable pop, decorative minimalism, non-conceptualism, video folk art, appropriated NFT”: these are just a few of the artistic ventures not yet attempted that could turn their popularizers into cultural phenomena. “You too can fail upwards, if you try,” Waters insists, but you’ve got to do it with a sense of humor. “Mock yourself first. Then you can be as crazily righteous as you want.”

Based in Seoul, Colin Marshall writes and broadcasts on cities, language, and culture. His projects include the Substack newsletter Books on Cities, the book The Stateless City: a Walk through 21st-Century Los Angeles and the video series The City in Cinema. Follow him on Twitter at @colinmarshall, on Facebook, or on Instagram.

How to get into IT without a degree?