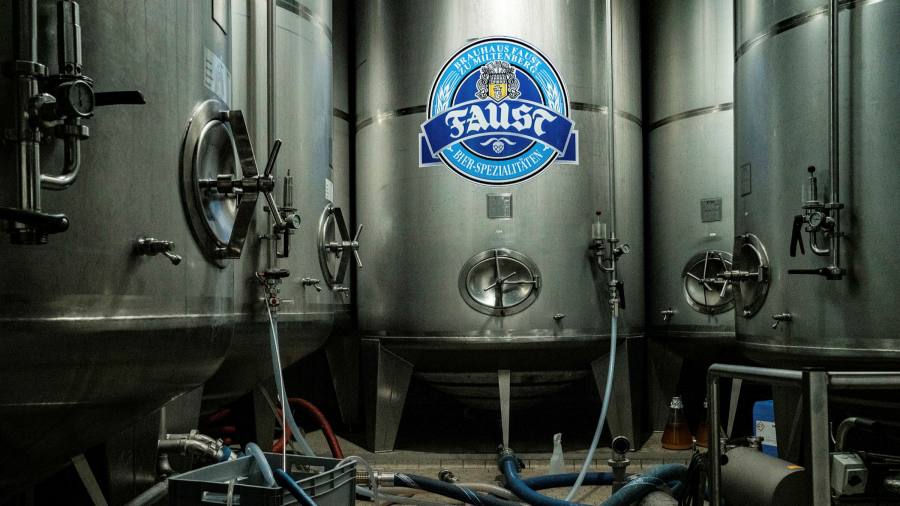 German brewers have long been wary of increasing prices.

When King Ludwig 1 raised the ale tax by 8 per cent in 1844, riots broke out between labourers and the army in Munich that lasted for three days. But Johannes Faust and his 1,500 counterparts scattered across the country may soon have little choice.

Faust has brewed beer on the banks of the Main river in northern Bavaria, nestled between the half-timbered houses in the historic centre of the small town of Miltenberg, for 30 years. The chief executive has never seen his costs surge on the scale they are today.

The malt Faust’s family-owned brewery has bought from local German producers since it started making beer in 1654 will soon double in price. Russia’s invasion of Ukraine has hit supplies of the grain from the two countries, which together produce over a third of the global barley market.

The brewery is also having to pay at least a third more for its glass bottles, along with over 50 per cent higher prices for plastic cases, and three-quarters more for its metal bottle caps. Energy, transport and staff costs are also going up. “I’ve never seen inflation like this,” said Faust.

This brewery, like many in the country, had been able to shield customers from higher costs owing to long-term supply contracts. The doubling of the malt price that he recently agreed is for next year’s supply, while its two-year energy contract means its electricity prices will not go up until 2024.

But, unless costs tumble fast in the coming months, higher prices for the country’s beer drinkers look set to follow. Holger Eichele, head of the German brewers’ association, said: “For many companies this is becoming an existential threat.”

Across the eurozone, manufacturers are under pressure from rising costs — producer prices rose at an all-time high of 37.2 per cent in the year to April.

But the sudden surge in costs is just the latest shock to hit Germany’s breweries. Only a few countries drank more ale than the 83.8 litres each German consumed on average last year. Yet, as more health-conscious consumers choose other drinks, the figure has fallen steadily since the 1970s, when they drank 150 litres per person.

If inflation means Germans have to pay much more for their steins of beer, it could squeeze demand for the national tipple even more.

Surging costs have been the last straw for some, such as the 558-year-old Frankenwälder brewery in north-east Bavaria, which filed for insolvency this year after many local beer festivals shut for two years during the pandemic. “I fear some breweries in our size range will have problems with higher costs because they don’t have market power,” said Faust.

For now, the average German beer drinker will have barely noticed the increase in prices, which accelerated only slightly to 2.9 per cent in the year to April, according to Germany’s statistical agency. That is well below broader consumer price inflation of 8.7 per cent in the year to May. This moderation, like a pledge of sobriety at Munich’s Oktoberfest, looks set to be overtaken by circumstance.

This month, Faust raised its price by 10 cents per litre of beer, equal to a higher than usual 6.5 per cent increase, taking the price for a 20-bottle crate of its best-selling Pils to €16.49. “But that was decided last October, long before Ukraine, and it does not even come close to offsetting our higher costs,” said Faust.

The Berlin Brandenburg brewery association, a regional trade group, said prices for beer drinkers could rise up to 30 per cent this year. Radeberger, the biggest German brewer based in Frankfurt, said it also worried about “the increasing scarcity of raw materials and the resulting further price increases”.

Economists agree that the capacity for factories to handle high input costs without raising prices for consumers would not last. “Just the delays built in to pricing policy mean there is still a lot of inflationary pressure in the pipeline for the next few months,” said Carsten Brzeski, the Frankfurt-based head of macro research at ING.

Oliver Rakau, chief German economist at Oxford Economics, said what started as mostly an oil and gas price shock was broadening to drive inflation in many other products and services. “There’s no denying that higher energy and commodity prices will feed through into other products, like food and drink prices, and that could lead to higher restaurant prices, which pushes up services inflation,” he said.

Improving market conditions may also help German brewers to pass on more of their high costs to consumers, who at the moment pay much lower prices than their counterparts in places like the UK.

Beer sales have rebounded in Germany recently — rising 5.1 per cent in the first four months of this year compared to a year ago, according to Germany’s statistical agency — and the reopening of many beer festivals including Oktoberfest after two years of Covid closures, is likely to boost demand. Beer prices at this year’s Oktoberfest will be on average 15 per cent higher than the last one three years ago, at €13.37 per foaming litre.

Still, those who know their history are keen to avoid alienating the country’s drinkers. Asked whether he will raise prices even higher for his customers next year, Faust gave an anguished look. “We have to be very careful,” he said. “We have to think about it, but maybe we can avoid it if things change in Ukraine.”